Synthesis of Benzimidazole-Oxadiazole Derivatives and Their Effects on Candida Species

Today, although there are a lot of drugs being used for fungus infections, much of the research still has been continued in this area on account of the unsatisfactory status of present treatment of fungus, drug side effects, toxic effects and the acquisition by the infecting organisms of the resistance to the present drugs. Benzimidaz-oles have occupied a unique position in heterocylic chemistry and its derivatives have attracted considerable interests in recent years for their versatile properties in chemistry and pharmacology. Drugs containing this group and its derivatives have a therapeutic effect in many cases such as antifungal, antimicrobial, anti-inflammatory, anticancer, antiviral, antidiabetic etc. Due to these properties, all clinic, pharmacokinetic and chemical studies of benzimidazole-containing drugs are extremely important in drug research and discovery. In this study, new benzimidazole-oxadiazole derivatives were synthesized, confirmed the structures by spec-troscopic techniques, and their effects on four different Candida (Candida albicans, Candida glabrata, Can-dida krusei, Candida parapsilopsis) species were investigated. Structures of them were elucidated by 1H-NMR, and Mass spectroscopic data. According to the results of in vitro antifungal activity, the compounds 4c and 4d, which features 5-chlorobenzimidazole scaffolds, were found to be the most promising compounds in the series with a MIC50 value of 12.5 µg / ml against C. glabrata when compared to the reference drug ketocona-zole (MIC50: 12.5 /g / ml). 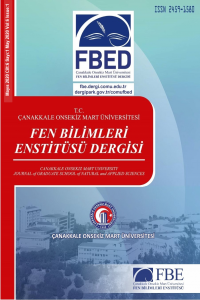