The aim of this study was to make an analysis of sports news that were intensively mentioned in Turkish media within itself and in this way to clarify which properties of them were more intensively carried to the written media. For this purpose, frequency of the appereance of the Turkey first super league teams those were close to be champion, in middle orders and struggling in order to stay in first league in sports newspapers and some circulated newspapers, their content and numbers of news were decided, evaluated and the appearing results were interpreted. In this study, 3 sports newspapers (Pas, Fanatik, Fotomaç) and randomly selected 5 circulated newspapers (Star, Hürriyet, Sabah, Milliyet, Türkiye) of the Turkish national press were examined. The investigation contained the period between 4 weeks to the end of first super league season and the end of following 5 days (total:33 days). At the investigation step, the teams in the league were grouped according to their grades in a month before the end of the season as; Teams as Candidates to Championship" (TCC), "Teams in Middle Orders"(TMO), "Teams in the Place of Dropping out of its League"(TPD). Further, the contens of the news were evaluated from the points of "Trainers", "Athletes" and "Administrators". On the other hand, another classification was made as; "First Super Football League News", "Other Football News"(Europen League, National Team, Second and Third League News) and "Other Sports News"(sports different from football). Lastly, number of the articles in the newspapers were determined and used in investigations. Contents and the number of the news were determined by frequency analysis. For the statistical analysis, the differences between two type newspapers were calculated by Student-t test. Also, the differences between numbers and contents of news sports newspapers and of circulated newspapers, were calculated by "One Way Anova" and "tukey" Test. Number of the pages in daily sports newspapers were determined as; 5.42 ± 0.14 (TCC), 0.60±0.04 (TPD),1.01± 0.05 (TMO) In these publications news about TCC surpassed those of TMO and TPD (p < 0.01) and news about TMO surpassed those of TPD (p< 0.05). Same situation was valid for the number of the news . In sports newspapers, administrators, trainers and athletes of TCC were mentioned more than TPD and TMO (p<0.01). When the contents of the published news about Turkey First Super Football League were concerned; it was seen that news about athletes surpassed those of trainers and administrators (p<0.01), and also news about administrators in those newspapers were more than those trainers (p<0.05). On the other hand, number of pages of the all sports news in sports newspapers were realised as; Turkish First Super Football League news 7.00 ±0.16, other football (OF) news 1.96 ± 0.14 and other sports (OS) news 1.07 ± 0.08. Besides, total number of pages assigned to sports news in circulated newspapers were appeared as; TCC 2.42±0.09, TPD 0.27±0.02, TMO 0.35±0.02. Here, it is understood that more pages are assigned to the news of TCC than those of TPD and TMO (p<0.01). Same situation was valid for the number of small and big news .In circulated newspapers, news about athletes, trainers & administrators of TCC were appeared more than TPD and TMO (p<0.01. On the other hand, when the publications of the circulated newspapers about Turkey First Super League were concerned, it was seen that, athletes were mentioned more intensively than trainers and administrators (p<0.01); and administrators and trainers were mentioned in similar ratios. Again , number of pages of all sports news which were published in circulated newspapers was as such; First Super Football League; 3.06±0.11, OF 0.57±0.04, and OS 0.86±0.15. 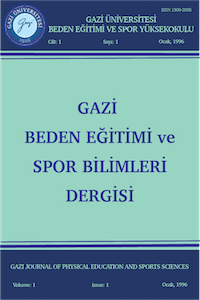