In recent years, research on intelligence has developed new methods and understandings in the field of education. In the education system, studies have been carried out to develop mathematical and linguistic intelligence for many years. In the same way, these classical methods are used in sports training. The Multiple Intelligence Theory, which brings different approaches and methods to education, is considered as a solution to this situation. This theory argues that it is insufficient to evaluate people as having only verbal and numerical intelligence and that there are eight intelligence areas in each individual. The use of multiple intelligence theory in education and sports science is based on and aims at thinking about what individuals can do apart from what they do. By taking advantage of this theory in sports science, it can lead to much more successes by determining the multiple intelligence areas of athletes and methods to be applied. Athletes are aware of their dominant intelligence and manage to deal with problems, think and develop feelings of self-confidence. However, research on the field of multiple intelligences is not capable and capable of a generality. By increasing scientific studies on the subject, studies on athletes in numerous and different sports can be expanded. This study could be a resource for sports scientists and coaches in determining the areas of intelligence of individuals interested in sports according to the Theory of Multiple Intelligence. The aim of the study is to make a compilation of current studies in which the fields of intelligence of athletes from different sports branches are determined according to multiple intelligence theories between 2012 and 2020. Literature screening method was used in the study. To examine the studies carried out in the field; Google Academic, DergiPark, Pub Med and Web of Science databases were used. In the scientific studies examined, it is seen that the level of bodily-kinesthetic intelligence in athletes is more dominant than in other areas of multi-intelligence. It is thought that this study will benefit the researches to be carried out in the coming years and contribute to the field of sports sciences. 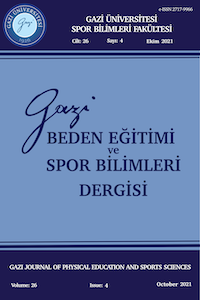