A numerical model for a Stirling engine

The concentrated solar systems by using Stirling engines become more and more important as its renewable, cheap operational and management aspects. Thus, the usage of power sources related to SEs and their model and simulations are growing among the scientists for better efficiency and performance under different operating states. In the present study, a new SE simulation scheme has been developed by operating under Matlab/Simulink. The code mainly models and studies the thermos-mechanical performance of a beta type SE. The model includes the extensions from the solar power side under a constant temperature together with thermal and mechanical outputs. Since it has been a nonlinear model, some transient and dynamic phenomena have been taken into account to complete the system operation from start-up to full power state. The detailed model and simulation results are promising by comparing the earlier analyses even for using a semi-empirical formulation for the electricity conversion. 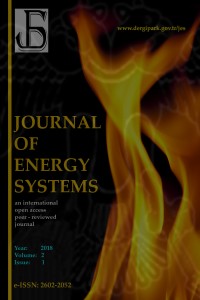 Journal of Energy Systems is the official journal of

JES is licensed to the public under a Creative Commons Attribution 4.0 license.