Journal of Research in Veterinary Medicine

The history of endocrine disrupting chemicals that alter the synthesis/degradation of natural hormones by binding or activating endocrine receptors in the body goes back to the 1950s. Organochlorine pesticides (OCP), Polichlorinated biphenyls (PCBs) and Polybrominated diphenyl ethers (PBDEs), which are currently banned but are used extensively for a period, remain in nature for a long time due to their high stability and oil deposition properties. Due to bioaccumulation and biomagnification, the amounts are constantly increasing after entering the food chain. People's exposure (90%) to these chemicals comes from foods. We investigated the contamination of 14 OCPs (α, β, γ-hexachlorocyclohexane, hexachlorobenzene, 4,4'-dichlorodiphenyl dichloroethane,4,4'-dichlorodiphenyl dichloroethylene, 2,4’-dichloro diphenyl trichloroethane, 4,4’-dichloro diphenyl trichloroethane, heptachlor, aldrin, dieldrin, α-endosulfan, β-endosulfan, methoxychlor), 7 PCBs (28, 30, 52, 101, 118, 138, 153, 180) and 6 PBDEs (17, 47, 66, 100, 153, 183) in lamb meat and fat and the effect of sex on their levels. The method used was validated according to SANCO 12571/2013 and EUROCHEM 2014 Verification Manual. Endocrine disrupting chemicals residues were found in 75% of males and 33.3% of females samples. The residual contents of the PCBs detected in all of the samples. While hexachlorobenzene, 4,4’-dichloro diphenyl trichloroethane and PCB52 were the most common residues among the their groups, whereas only PBDE17 was detected in the PBDEs. Although the incidence of residues is higher in the male animals, the detected amount is higher in the female animals. All residues levels found below the level specified The Turkish Food Codex and The European Union Regulations. 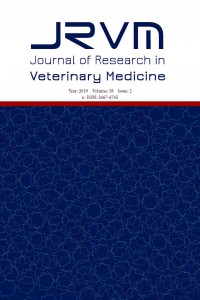