Women as School Administrators: Problems and Expectations (The Case of Kilis Province)

In this study, it was tried to determine the problems and expectations of female school administrators in Kilis. The case study method, one of the qualitative approaches, was used in the research. The study group of the research consists of 10 female school administrators working in Kilis. The study group was formed by using the purposive sampling technique. “Semi-Structured Interview Form” which was prepared by the researcher was used as data collection tool. Content analysis was applied in the analysis of the qualitative data. As a result of the content analysis of the data obtained from the interviews, codes, sub-themes and themes were created. As a result of the interviews, it was seen that women encountered problems related to their family and school life because of being school administrators. It was revealed that they experienced problems in time management, and problems related to their roles and responsibilities regarding family life. Regarding school life, it was seen that they had problems arising from the long working hours, social perception, and women's prejudices about themselves regarding school life. It was revealed that female school administrators have expectations such as salary increase, regulation of working hours, and regulation of responsibilities. 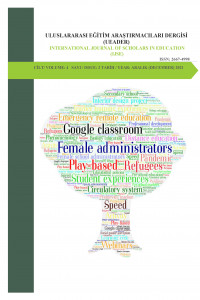