The aim of this research is to examine the writing errors of the primary basic writing and the letters of the first grade primary school students. The research was carried out by qualitative research method using document analysis method. Within the scope of easily accessible case sampling, Çalatlı Town, which is connected to Yozgat Central District, has worked with 112 students studying in the first grade primary school. 60 of the students are female students, and 52 are male students. The research was conducted in April 2018. As a data collection tool, a text in the Primary School Turkish Course and Student Workbook was used. The texts were copied on the student's stripes. In the analysis of the obtained data, a descriptive analysis technique was used. As a result of the research, it has been determined that a student wrote the same letter in different forms in the same text. It has been determined that they can not write letters in a line size appropriate for the line space. It is understood that there is a problem with the diversity. In the case of letters containing a circle, it is understood that the circle is not completely closed, and that there is a lack of drawing in a small part of the circle. It has been determined that the dot or short line in the letters with dots or short lines is drawn much longer than normal. It is seen that the horizontal lines in the letters are drawn not in a straight line but in a curved line. It has been found that the light tack at the lower end of the letters l and t is drawn much longer than normal. Another typing error observed in the writing of all letters is that the letters are not written in line with the line. Suggestions were made within the scope of the research results. 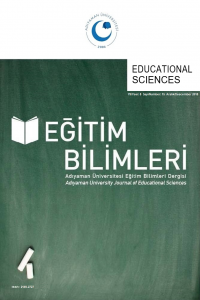