By analyzing the eye's fixations, saccade and pupil size criteria, it is possible to obtain the cognitive status of individuals about the point they are looking at. In this study, the processes of examining the paintings of individuals who have received education in the field of painting and those who have not been trained have been analyzed. For the purpose of the research, eye movements of 112 trained and untrained participants were recorded and analyzed. The number of fixations, number of saccades, fixation time, pupil size and amplitudes of the saccades were analyzed to determine the differences between the participants. As a result of the research, while there was no statistically significant difference in the number of fixations between the educated and uneducated groups, a difference was found in the number of saccades. In addition, while there was no difference in the initial fixation time of the groups, a significant difference was determined in the average fixation and total fixation time. On the other hand, there was no significant difference between the groups in terms of pupil size. Again, there was no statistical difference between the groups in terms of the mean and total amplitude of the saccades. According to the results of the research, it was observed that the educated and untrained groups could be distinguished from eye tracking metrics by the number of saccades, average fixation time and total fixation time. 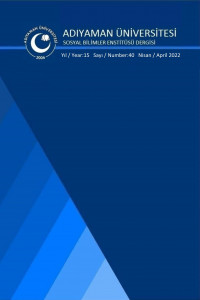