Turkey is located in one of the most active seismic zones of the world. Our country, which suffered from many devastating earthquakes in the past, will undoubtedly face destructive earthquakes in the future, as well. In prerepublican and post-republican times, a number of earthquakes occurred around and in the center of Gerede, which is located in the first-degree seismic zone. Gerede suffered great losses due to those earthquakes, which also had negative effects on its development. A massive earthquake with 7.4 magnitude that occurred on February 1, 1944, at 06:23 in the morning, was felt primarily in Gerede, and also in all districts of Bolu, in some parts of Ankara, in Zonguldak and in Çankırı. As a result of this earthquake, people suffered great losses and all labor was lost. This undesirable situation caused by the earthquake has been felt for many years. In this study, the 1944 Bolu - Gerede Earthquake was investigated based on archival sources and the periodical national press. 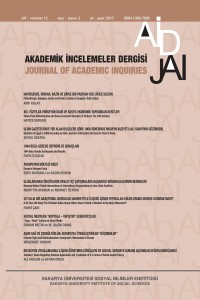