The Others According to the Qur'an

A human who is superior to other beings by possessing reason and willpower, is not a stereotypical structure, but has diversity in terms of color, language, gender and etc. Man, who has to live together as a civilized entity and often prefers common life, has sometimes considered diversity as the cause of conflict and the problem area. In almost every system, there are appreciated and centralized segments or segments that have been marginalized and viewed as the other in regard to their belief, moral criterion, worldview, and way of life. It cannot be said that it is practically widespread, although it is theoretically possible to make no difference and to surrender the right to the different by regarding the differences as wealth. The Qur'an, which aims to build a social structure composed of faithful and moral individuals, has set a common law in this context to cover different belief groups, although it usually deals with believers; in principle, the Qur’an states that people are equal and that different segments could live together. Nevertheless, the Qur'an has categorized the society in a certain scale of ideological and moral criteria. This study explores how the Qur'an categorizes and approaches the various religious, ethnic, sexual and class groups that have been potentially subjected to the treatments of ‘the other’ throughout history.

Qur’an, Society, Distinct Identities, Othering, Rights of the Others 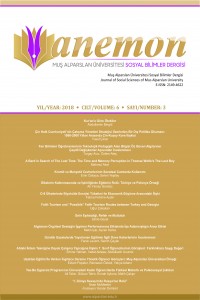