After the proclamation of the Rescript of Gulhane, the basic thought which was suggested with the purpose of saving Ottoman Empire from the effect of nationalism that has increased its effectiveness around the world in post-French Revolution era and wanted to generate, appeared as the thought of building an Ottoman Nation. It wouldn't be wrong to say that Ottomanism or the attempt of building an Ottman Nation became an attempt which was adopted as a government policy at first, was accepted by the intellectuals of that period and came in an intellectual content as a possibility of salvation of the empire afterwards. Although this attempt lost its validity to a large extent after the Balkan Wars, it wanted to be continued through the togetherness of a number of certain elements. An example of this is Câmi (Baykurt) Bey who attended to Trablusgarp War actually, hold offices like being a deputy in Turkish Parliament and being the first interior minister of Republic of Turkey, in this regard played an active role in Turkish politics throughout his life. In this study, it is tried to touch to toughts concerning the Ottomanism that were suggested wtih referance to book Osmanlılığın Atisi, Düşmanları ve Dostları written by Câmi (Baykurt) Bey in 1913. 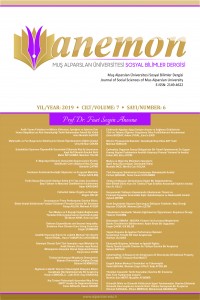