Journal of Bartin Faculty of Forestry

In this study, the effectiveness of topographical map based traditional method and computer-assisted method was compared in calculation of cut and fill volumes in a sample forest road with known geometric elements.  For this purpose, 789 m of normal B type forest road, which was planned by using traditional method in the boundaries of Sultanbeyli in Istanbul, was investigated. Autocad Civil 3D software was used to determine the cut-fill ratios by considering different projecting criteria in application of computer-assisted method. The differentiation of the cut-fill ratios may vary depending on the size of the horizontal curves and the cross-section density along the roadway. Thus, firstly, the sizes of horizontal curves were defined in AutoCAD Civil 3D environment by defining some of the horizontal curve parameters (i.e. project design speed and minimum and maximum radius of horizontal curves used in forest roads) while keeping the original intersection points of the roads designed by traditional method. In the second stage, by taking into account of both traditional and computer-assisted methods, cut-fill calculations were made in three different ways: 1) for 65 cross-sections, 2) for  cross-sections  5 m intervals, and3)  for cross-sections with 10 m intervals.. Determination of horizontal curve parameters and cross sections by traditional method, the  net cut volume was calculated as 140 m3 in the case of cross section of 10 m intervals, while it was calculated as 150 m3 for 5 mintervals. In the case of computerized decision making of horizontal curves and cross sectioning by traditional method, 80 m3 and at 40 m3 of net cut volume was calculated in cross sections of 10 m intervals and in cross sections at 5 intervals, respectively. The results of the study showed that more realistic results can be achieved when using computer based decision-support systems in the determination of the horizontal road geometric parameters for calculating the cut-fill volumes. 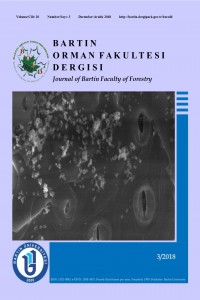