Forage kochia is one of the shrub species naturally growing in the flora of Turkey. The three kochia genotypes included in this study were collected from the pastures of Konya province. We investigated the feeding values of three kochia genotypes namely; red, green and intermediate forms at various growth stages; flowering (July), seed setting (September) and seed ripening (November). The research was designed in Split Plots in Randomized Block Design with three replications in 2018. We analyzed the Dry Matter, Ash, Ether Extract, Crude Protein, NDF, ADF, and ADL. Out of the figures we derived from the laboratory analyses we figured out the Relative Feed Value (RFV) using NDF and ADF. According to the result DM percentage ranged between 55.07% and 61.78%, crude protein percentage between 9.22% and 9.75% depending on the cutting periods. Maximum NDF value was obtained in seed ripening stage with an average of 64.35% while the maximum ADF value was obtained in bloom stage with an average of 44.28%. The ADL received from July (i.e., 14.56%) and November (i.e., 13.16%) was the maximum ADL value, and these values were statically in the same group. The RFV of forage kochia in September (Seed Settings) is higher quality (i.e., 92.2) than other periods. We can express that the Intermediate phenotype during the dry feed period in July provides higher feed quality than the two phenotypes. The research results show that forage kochia stands out by obtaining feed from rangelands in drought areas because of delivering the 4th quality standard to livestock in July, which is in the dry feed period for Central Anatolian. 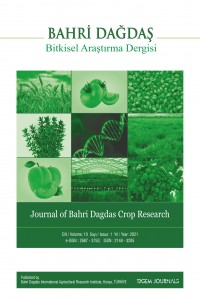