Turkey's economy experienced in 1980 after the liberalization of export-oriented growth model has been adopted as a growth model with the process. Until 1980, more liberal and statist economic policies were implemented in some periods. Export policies are also shaped according to the economic policies applied. For the last twenty years before 1980, an import substitution industrialization policy was followed. The aim of this study was to determine Turkey's economy with exports for the long-term relationship between GDP. Working in Turkey's GDP and export data between 1923-2019 was used as the US dollar. First, examined the development of exports in the framework of the economic policies implemented in Turkey and throughout history have sought clues to the relationship between exports and GDP. In the analysis part, an econometric study was conducted and no long-term relationship was found between exports and GDP. Considering exports as an important economic variable in terms of financing imports rather than a source of economic growth constitutes an important output of this study. 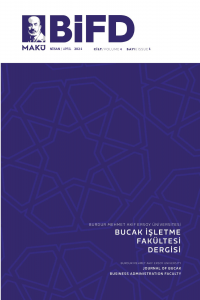