Biosystematic Studies on Some Fumana Taxa Which Naturally Distributed in Eskişehir

In this study, Fumana aciphylla, F. laevis, F. procumbens, F. thymifolia and F. paphlagonica which naturally distributed in Eskişehir and its surroundings, were examined biosystematically. Fumana, one of the important genera of the Cistaceae family, contains perennial shrubs and xeric plant taxa. The most distinctive features of the Fumana taxa are woody root and stem, alternate, convoluted stem leaves and 5-lobed yellow petals. Flowering begins in the spring and the vegetation period lasts until the end of summer. Fumana taxa, which are generally known for their high adaptation to hot and arid climates, are especially grown in regions where the Mediterranean climate is dominant, but there are also taxa that can adapt to warmer and colder climates. In this study, 5 Fumana taxa (F. aciphylla, F. laevis, F. procumbens, F. thymifolia), 1 of which is endemic (F. paphlagonica), distributed in Eskişehir and its environs, were examined comparatively in terms of morpho-anatomical and palynology for the first time. The aim of this study is to comparatively reveal the taxonomic, anatomical and palynomorphological features of the naturally distributed Fumana taxa in Eskişehir/Turkey. 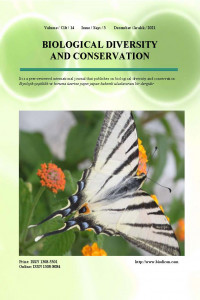