The greatest negative impact on natural wealth is human-induced. Due to the rapid increase in the population of Antalya in recent years, the city needed new buildings, new roads and new living spaces. For this reason, the existing green areas in the city have been lost or stuck. In the study, the determination of green areas under anthropological influence such as settlement and human pressure in the central districts of Antalya, parcel measurements and determination of basic floristic features were investigated. As a result of the research, a total of 31 important areas affected by anthropological activities were identified, 4 in Aksu, 5 in Döşemealtı, 6 in Kepez, 9 in Konyaaltı and 7 in Muratpaşa, which are the central districts of Antalya. According to the ratio of the areas covered by these regions, which are determined in the central districts of Antalya, to the district area, Muratpaşa district comes first with 16.69%. This is followed by Döşemealtı with 13.36%, Kepez with 10.03%, Aksu with 7.73% and Konyaaltı with 1.58%. The reason for the high percentage of area in Muratpaşa district is the Falezler and Lara coasts in the district. In order to leave a more livable and green world to future generations, the identified areas must be protected and maintained. Such areas are important sink areas for Antalya, which is under the pressure of urbanization. These areas also have Floristic, Ecological, Sociological and Landscape values. 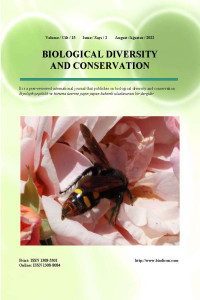