Tawhid and The Prophet theme In Sadru'l-Islamic Period Poems

In Arabic literature, poetry was the most practiced branch of art in the age of Jahiliyya (Ignorance). That's why poetry is called Diwanu’l-Arab. This feature of the Arab society continued in the same style with the advent of the religion of Islam and became even richer by adding new ones to the old themes of the poem. In this study, the theme of tawhid and the Prophet Muhammad, which was used in the poems of the Sadru'l-Islamic period, was discussed. Before moving on to the main subject of the study, the limits of this period were determined and it was revealed which time periods it covers. Then, brief information about the importance of poetry in the age of Jahiliyya is givenLater, the verses and hadiths, which are the reason for the claims about the decline of poetry in the Sadru'l-Islamic period, were evaluated as a summary and it was explained that they could not be an evidence for the decline of poetry, on the contrary, the Prophet used poetry as a means of jihad against the polytheists, and therefore it developed. It was stated that the main principle that was emphasized after the new religion was revealed to the Arab society was tawhid, because the Arabs of jahiliyya worshiped idols with the claim that they would be intercessors even though they believed in AllahIt is explained with examples that the poets who converted to Islam in this period used the theme of tawhid frequently in their poems after they accepted the religion of Islam, and that this was not limited to the poets residing in Medina. In the Sadru'l-Islamic period, It is explained by giving examples that poets created a wide corpus by processing his superior virtues in their poems within the theme of the Prophet, and that such poems were not limited to the Prophet's life, but continued after his death. 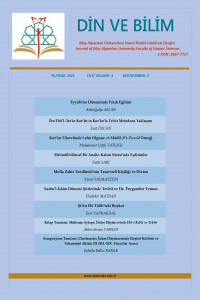