This study aims to develop a valid and reliable scale that covers the sustainable management behaviors of school principals according to the perceptions and evaluations of teachers working for state schools and includes items related to these behaviors. After the literature review on sustainability, a five-point Likert-type item pool consisting of seventy-five items was created, and then, the items were presented to eleven experts to evaluate the content validity of the items. Fifteen items were removed from the scale after expert opinions. After this process, a scale draft form consisting of sixty items was created. The scale item draft form was applied as a pilot study to a group of twenty teachers, and then to carry out the EFA analysis, the first application was performed in March-April 2020, and to carry out the CFA analysis, the second application was performed in May-June 2020. The scale was applied to the teachers working in the Çekmeköy district of İstanbul (the researchers reached 436 teachers in the first application and 724 teachers in the second application) using online platforms. Within the framework of the findings obtained, the scale was observed to have a four-factor structure after the EFA process, and ten items, which were found to have a load of .30 or more from more than one factor and the load difference was less than .100, were removed from the scale. As a result of EFA, the SMB scale consisting of a total of 50 items with sub-dimensions of “Corporate Functioning Behaviors”, “Economic Efficiency Behaviors”, “Environmental Sensitivity Behaviors”, and “Protection Sensitivity Behaviors” that explain 76.28% of the total variance was obtained. Then, the reliability coefficients of the scale, the discrimination indexes, and the correlations between the total and sub-dimensions of the scale were calculated. Finally, CFA was performed to validate the scale model and the obtained goodness-of-fit values confirmed the scale model under the criteria. All these obtained values confirm the valid and reliable structure of the developed scale. 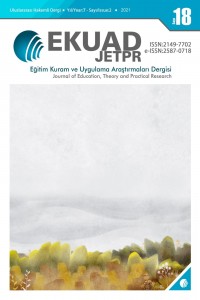