ASPECT AND GRAMMATICAL FORM OF STATES IN KURMANJI

The term aspect is related to the internal temporal structure of a situation described by a verb.
There are two main types of aspect: grammatical aspect and lexical aspect. These two aspect
types combine and interact in a sentence to give aspectual meaning (Smith). But some verbs
because of their lexical property can’t be used in some grammatical aspects. The typical example
of this phenomenon is that some verbs do not occur in the progressive in English. Kurmanji is
flexible in that sense but there are some verbs, because of their intense stativity, cannot be used
in the grammatical forms of the progressive aspect; to give such meaning they are used in past
participle with copula. Posture verbs and related verbs like sleep and some verbs of contact and
holding are such verbs. The aim of this paper is to show and discuss that feature of Kurmanji.
However, the paper, if not in detail, gives place to grammatical and lexical aspect in Kurmanji
in general, discusses the impact of both aspects on each other and finally shows the impact of
aspects of foreign languages on the Kurmanji. 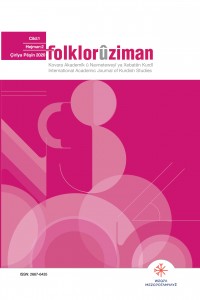