The concept of the human circulatory system needs to be structured correctly by students in their minds. For this purpose, biology education should be managed by using different teaching and techniques. Thanks to these different methods and techniques, each student can process information in their minds, perceive them correctly, and increase their permanence. This study has been conducted on the inquiry-based learning method, which has been increasingly used in biology education today. In the study, the effect of the activities prepared on the circulatory system according to the inquiry-based learning method on the 21st-century skills and reflective thinking levels of 11th-grade students in terms of gender was examined. In the research, various scales were used to determine the 21st-century skills and reflective thinking levels of the students. These scales; ‘21. Century Skill Scale "is the" Attitude towards Stem Scale "is the 21st-century sub-dimension scale and" Reflective Thinking Level Determination "Scale. These scales were applied to both female students and male students as pre-test and post-test. It was conducted with 11th-grade female and male students in Tülay Başaran Anatolian High School in Samsun province's İlkadım district in the spring of 2016-2017. A total of 45 students, 24 from the female student group and 21 from the male student group, were included in the study. The data obtained after the application were analyzed using the SPSS.21 statistical program. According to the findings obtained as a result of the analysis, there is no significant difference between the students in terms of gender in the data obtained after the first application. However, in the data obtained after the second application, a significant difference was found for all three scales in the male student group compared to the female students. 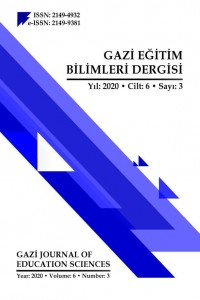