The Issue of the Finality of Prophethood in Islamic Thought

Although Islam accepts the prophethood, which theologians define as a means of attaining happiness in this world and in the hereafter, as a basis of belief, it has also put an end to the institution of prophecy. In addition to the followers of divine religions such as Judaism and Christianity, those who emerged with the claim of prophethood (tanabbi) also opposed this teaching. While the People of the Book objected to grudges by claiming that the last prophet should come from them, why did the entrepreneurs close now, while the institution of prophecy has not been closed until today? If sending a prophet is a blessing and mercy from Allah, does not the end of prophethood mean that Allah cuts off His mercy from people? Even if the situation of sending a prophet with a new shari'ah comes to an end, what happens if a prophet is sent to convey the shari'ah of the previous prophet? They questioned Islam's understanding of hatmu'n-nubuvve with the following questions: Although the subject is dealt with in classical kalam works, it is accepted that today it is insufficient in the face of the claims of Western philosophy and orientalists. Muhammad Iqbal, who dealt with the teaching of the prophethood of Islam with theological and rational method, successfully defended the subject with his explanations and brought a different perspective to Islamic thought. In our work, Mr. The issue of hatmu'n-nubuvve, which started to be discussed after the death of the Prophet and continued until our century, will first be discussed in terms of the classical period theologians, and then Hz. The subject will be tried to be explained mentally and theologically by including the explanations made by the Muslim thinker Muhammad Iqbal. 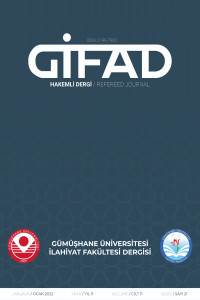