The aim of this study was to investigate the effects of gender activities prepared by considering such values as being just, respect, freedom and tolerance in social studies curriculum on the students’ perceptions and attitudes. The participants of this study was composed of a total of 51 seventh graders in a secondary school in Tokat province, 26 of which were in the experimental group while 25 were in control. Developed by the authors, “Gender Attitude Scale” was used as the data collection tool. Within the scope of the study, social gender activities lasting eight weeks related to education, economy, politics, social life and social gender were prepared in order to raise awareness about the social gender. The Gender Attitude Scale was conducted both before and after the activities. In order to reveal the difference in the attitudes between the control and experimental group, pretest-posttest control group design was used. The mean, frequency, independent groups t-test and Mann Whitney U test were run. At the end of the research, a meaningful difference on behalf the students in the experimental group (t=2.219, p<.05) amongst the experimental process scores of the study group students came out as a result. When experimental group and control group students’ before and after research attitude scores are examined, both experimental group students’ and control group students’ attitude levels in relation to gender presented a meaningful difference according to sex (p<.05).  As a result of the study, the social gender activities were determined to be effective in raising social gender awareness. 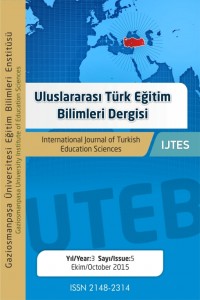