Aim: In cases with adnexal mass, it should be differentiated from the benign-malignant mass. Due to the absence of early symptoms in ovarian cancer cases, late diagnosis is important because the prognosis of this disease is poor. This retrospective study was conducted to better define benign-malignant adnexal masses in the preoperative period and to predict the malignancy probability of adnexal mass at a higher rate.
Methods: 570 patients who applied to the Istanbul Training and Research Hospital Gynecology and Obstetrics Clinic in three years as retrospective were included in this study. In this study, the risk of malignancy index (RMI) value was calculated by examining the ultrasonographic findings (bilaterality, solid component, presence of acid, presence of metastasis, multilocularity), CA125 values and the age of the patient, and these values were compared with postoperative histopathological diagnoses.
Results: When the ultrasonographic findings were evaluated, it was seen that the presence of bilateral and solid areas was significant in terms of malignancy. It was observed that there was a significant difference between RMI values in malignant and benign masses (p <0,001). In terms of malignancy; CA-125 was found to be more significant compared to age and ultrasound score, and the threshold values obtained were found to be more sensitive than the baseline values. It was found that there was a significant difference in RMI values between epithelial origin malignant ovarian tumors and non-epithelial malignant ovarian tumors (p <0,001).
Conclusion: RMI, which has high specificity and sensitivity in the preoperative period, is easy, does not require additional costs and is calculated without the need for any invasive procedure, and will allow a better management of adnexal masses by creating a higher rate of correct prediction of malignant adnexal masses. 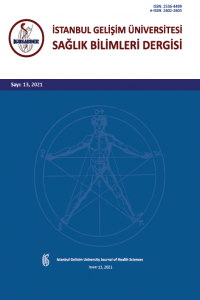