Aim: The aim of this study was to determine the validity and reliability of the Turkish version of the Alarm Fatigue Questionnaire.
Method: This study used a methodological design and a sample of 140 nurses working in intensive care units in three hospitals in Istanbul, Turkey. Data were collected with the "Personal Information Form" and the "Alarm Fatigue Scale". The data were analyzed at two stages involving adaptation and confirmation. In the adaptation process, four steps including “translation; back-translation; expert opinion; pilot study” were followed.
In the confirmation process, four steps were followed. In the first step, item analyses were carried out. In the second step, to assess the factorability of the correlation matrix, Kaiser-Meyer-Olkin (KMO) sample adequacy test and Bartlett’s sphericity test were used. Confirmatory factor analysis (CFA) was used to confirm the original construct. The third step involved testing the internal consistency of the scale. At the final stage, test-retest reliability was assessed by using Pearson’s correlation test and paired-samples t-test.
Result: The tool consisted of 13 items and two subscales. Content validity ratings of the scale items were over 0.35. Fit indices were calculated as: χ2/df=1.453, RMSEA=0.059 and CFI=0.91 for the scale. Cronbach's alpha coefficient was 0.71 for scale.
Conclusion: Turkish version of the Alarm Fatigue Questionnaire can be used as a reliable and valid measurement tool for the evaluation of alarm fatigue experienced by nurses working in intensive care units in Turkey. 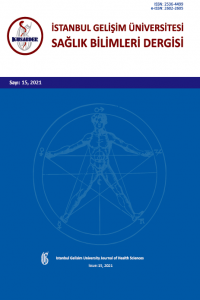