Continuity of Social Practices Producing the Space: A Tailor In The Mardin Bazaar

The space, which is reproduced by social practices, is not independent of time. Considering that space and time are relative to each other, it is necessary to talk about the continuity of the social practices that produce space. In this case, the issues must be approached from historical perspective. In this context, the concepts of space and time have been examined in the context of social practices, and then the production of space with social practices has been exemplified by a social history narrative. The Mardin Bazaar, which has been chosen as a research area with the idea that one of the most intense social production places in cities is the place of trade, is a place of trade that has maintained its vitality for centuries. Today, it is still possible to see the traces of the historical past in the mentioned bazaar. In this context, a meeting with a tailor has been held in the Mardin Bazaar and the memories of the tailor's life have been tried to be collected. In addition, the existing architectural features of the tailor shop have been documented and current photographs have been taken. In this study, it is aimed to focus on the area where the physicality of the space intersects with daily life, in the example of a tailor in Mardin Bazaar, in order to try to see the social production of the space. 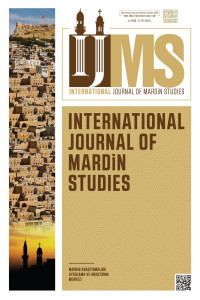