Inonu University Journal of the Faculty of Education

In this study, it is aimed to determine the relationship between the skill levels of 21st century learners and these skills. The sample of this study, which is carried out with relational research design, one of the quantitative research methods and non-experimental design, was determined by the easily accessible sampling method. The participants of the study consisted of 183 students in total studying at Atatürk University. Relational and descriptive analysis techniques were used to analyze the data which was collected by using Computational Thinking Scale, Digital Literacy Scale and Effective Communication Scale. When the descriptive findings were examined, it was understood that the students generally had most of the skills but experienced ambivalence about the algorithmic thinking skills. As a result of the correlation analysis, it was found that critical thinking, problem solving, creativity, empathy and active-participative listening were significantly related to all variables. On the other hand, digital literacy skills were found to be significantly correlated with all variables examined in the scope of the study, except I-Language. It was determined that the relationship between ego supportive language, active-participative listening, Self-recognition/Self-disclosure, and I-Language skills and algorithmic thinking was not significant. The variables with the highest correlation coefficient were found to be creativity and critical thinking. 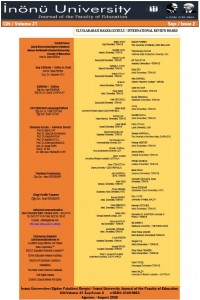