In this age, while the humanistic systems created by mechanic bodies become unsubstantial, subtle differences in reality principles create big differences in the simulacras of the susceptive human bodies. Today, when all the identities are deconstructed, no one can claim that the physicist identity will be left out of the cyborg metaphor and not lose its structure. However, will the new bodies of the physicists display new mental differences, as in the example of occupying soldier and insurgent suicide bomber cyborgs? In this study, we will be examining the formation of cyborgs (post-physicists) interested in human systems rising from the natural organisation of disorder sensitive dynamics. Under the guidance of the Dynamics of Disorder Sensitive Human Behaviour Theory, the study will concentrate on certain geographical locations, where such dynamics of no reality principles still exist, and feed from the culture and the traditions of these places. We will argue that these post-physicists, unlike their Western fellow men, will be against the modernity  and act utopic. In their homelands, they will stand against the impositions arising from a will to shape the modernist ideological hegemony and they will be constantly exploring areas that can avail the freedom against global threat. 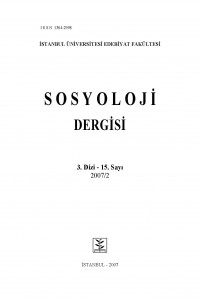