Arabic is a very rich language in terms of vocabulary. There are many Mu'tal and Sahīh [Sound and Unsound] words in this language. Lexicography and syntax scholars have made a great effort to compile the Arabic language, which has a wide vocabulary, and to adopt a systematic structure. In this context, since the 2nd Century Hijri, works that deal with the cases related to maqsūr and mamdūd words and form some of the themed dictionaries, have been copyrighted under the title of al- Maqsūr wa al- mamdūd. The scholar of Arabic language and literature, Abū Ṭayyib al-Washshā’ (d. 325/937), lived also in the 4./10. century in which this type of copyright movement gained momentum, and wrote works on this subject. Within the framework of the limitations of the study, only some parts of the work will be evaluated. In his work, which he wrote as prose, he benefited from the previous scholars. However, it differs from other works in this field by giving weight to syntax and dictionary and prioritizing mamdūd type words in his work. In this respect, al-Washshā'’s work is a dictionary and a spelling guide. In the work, the words mamdūd and maqsūr are discussed under two main headings as semāī and qiyāsī. Within each title, there are various sections. The words in these sections are explained with examples. In this study, first of all, al-Washshā'‘s life and the subject of mamdūd-maqsūr will be briefly explained. Later, al-Washshā'‘s work on the subject will be examined independently. It can be stated that the work has a short and concise expression in the mamdūd-maqsūr literature.
Keywords: Arabic Language, Lexicon, al-Washshā', Mamdūd, Maqsūr, Semāī, Qiyāsī 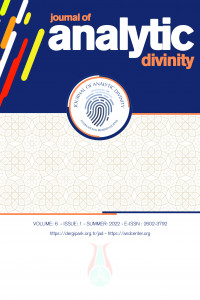