Journal of History and Future

Kasım Küfrevi was born in Bitlis in 1920, completed his education life in Istanbul University Faculty of Literature and get into politics in 1950. Küfrevi, who was elected as a parliamentary deputy of Ağrı from the ranks of the Democratic Party (DP) in 1950, also came to the fore with his identity as Nakşibendi. Despite being a newly organized party in Ağrı, the Democrat Party entered the parliament by taking the vote of confidence from the people with the influence of Küfrevi's religious identity and in addition to partisanship and ideological attitude, so it will not be wrong to say that the religious affiliation of Kasım Küfrevi and his accompanying people is effective as well. Being elected as a member of parliament from DP, Küfrevi was in the parliament again in the DP ranks for the second time 1954, but due to the disagreements within the party came to parting the ways with DP and took part as the founding member of the Hürriyet Party, which was established in the same year. Küfrevi, who was nominated as independent deputy candidate from the city of Ağrı in the 1957 elections, succeeded in getting into the Turkish Grand National Assembly (TBMM). Küfrevi, who was tried in Yassıada after the 27 May 1960 Revolution, was acquitted later. He was elected as a member of parliament with the New Turkey Party in 1965 for 13th period, the Republican Confidence Party Küfrev in 1969 for 14th period and lastly between 14 October 1973 - 12 September 1980 he was senator for Ağrı. Succeeded taking part at the parliament with three different party, Democratic Party, the New Turkey Party and Confidence Party, also as an independent candidate, Kasım Küfrevi during this time gave parliamentary questions both specific for the city of Ağrı and Turkish Social and Political Life and was able to establish many of these questions in the parliament. He raised important views on education, ideas, art, social and political issues. Despite being elected under different political parties as a deputy, Küfrevi appears both as a religious personality and as a leader who is loved and respected by the people of Ağrı. In the study, the political history of Kasım Küfrevi, who was appointed as a deputy from Ağrı and who has been in politics for a long time, will be examined with his biography. During the study, Prime Ministry Republic Archive, TBMM Archive, TBMM Court Ceremonies and periodical sections were used. 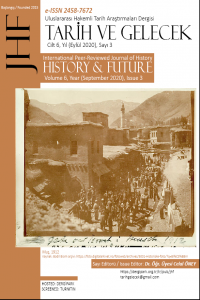