In this study, some morphological and physiological characteristics of Awassi sheep were investigated in Gaziantep and Kilis provinces. For this purpose, it was made measurements and detections in 100 heads of Awassi and their lambs in both cities between 2-5 aged. In ewes, fertility characteristics, live weight, some body measurements and lactation parameters were determined. Birth and weaning weight (60th day) and body measurements in these periods were determined in lambs. Animal material was fed with pasture throughout the day and additional feeding, and lambs were fed with milk and additional feeding. Statistical analysis of the study was evaluated with SPSS software. As a result of the research, it was found that Awassi sheep has white body with coarse-mixed fleece, brown-headed, rams with horned, ewes without horned. It has been determined that males and females with fat tailed, the nipples can be downwards in the form of a funnel as well as from the edges of the mammary gland. The fertility rate was calculated as 98 % in Gaziantep, and 99 % in Kilis province, litter size found as 0.98 in Gaziantep, 0.99 in Kilis province, survival rate on weaning (60th day) was calculated as % 96.93 and % 95.45 respectively at the same province ranking. The birth and weaning weights (60th) were determined as 4.04 ± 0.31 kg and 3.78 ± 0.30 kg, 21.6 ± 0.34 kg and 20.3 ± 0.30 kg, respectively, according to province order. The lactation period was found as 188.3 ± 2.14 days in Gaziantep, 182.4 ± 2.85 days in Kilis province, and average marketable milk yield found as 134.4 ± 5.30 kg and 117.4 ± 3.11 kg respectively, according to province order again. As a result, there is variation between provinces in terms of yield characteristics. It will be appropriate to make transfers between the provinces for breeding and breeding purposes find order to the improvement of low-yielding sheep on the basis of provinces in which. 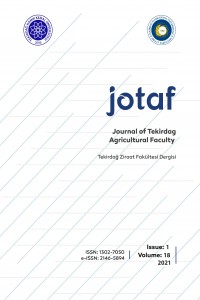