Football has always maintained its relevance from the past to the present, and in recent years, it has grown into a large industry, leaving many markets behind. Much study has been conducted in this field in order to increase the number of football enthusiasts and customers. Brand evangelism, a sophisticated kind of marketing in which people willingly advocate on favor of a brand, may give several advantages to a company. In this aspect, the current research aims to examine the level of team evangelism of football fans in terms of various variables (age, education, marital status and whether they have played football before). In the research, a sample group of 270 male Adana Demirspor fans, who participated as spectators in the football match between Adana Demirspor and Erzurumspor, the host in the 2019-2020 season, formed the sample group. Personal Information Form and “Sports Team Evangelism (eFANgelism) Scale (STES)” were used in the research. Non-parametric tests were used because the research data did not meet the normality assumption. Whitney Mann In pairwise and in-group comparisons, the U test was employed, and in groups of more than two, the Kruskal Wallis H test was utilized. While there were significant disparities between the amount of sports team evangelism (eFangelism) and the factors of age, education level, and marital status, there was no significant difference between them based on whether or not they had previously played football. These study findings are expected to assist league marketers and clubs design customized marketing strategies by better understanding sports consumer behavior. 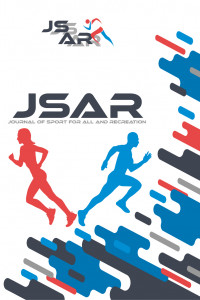 Articles published by Journal for All Sports and Recreation is licensed under the Creative Commons Attribution-NonCommercial-NoDerivatives 4.0 International (CC BY-NC-ND 4.0) License.