A case of generalized tuberculosis in a domestic pigeon

In this study, a case of generalized tuberculosis diagnosed in a 3-4 aged, female, domestic pigeon brought to … for necropsy was described. At the anamnesis, weakness, anorexia, puffy and ruffled feathers that started 3-4 months ago were stated. At necropsy, the animal was excessively cachectic, the feathers were fluffy, irregular and the feathers around the anus was contaminated with feces. Gross examination revealed numerous yellowish-grey colored nodules, some of which were combined with each other, ranging in size from 0,5 to 1,5 cm localized all internal organs serosal surface such as lung, liver, pericardium and intestines. Tissue samples taken from the lesions were examined histopathologically after routine tissue processing. Microscopical examination revealed that typical tubercles with prominent caseification necrosis in the centers of the foci, numerous mononuclear inflammatory giant cells around them and surrounded by connective tissue. A large number of mycobacterial agents were observed as red stained bacilli on sections stained with the Ziehl-Neelsen method. Diagnosis of tuberculosis was made in the light of gross and histopathological findings. 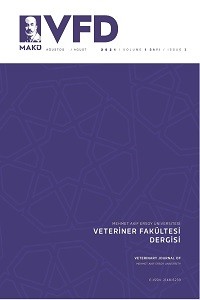