There are studies that present metabolic disorders in alcohol drinkers are associated with thiamine deficiency. Therefore, in the present study, it was aimed to investigate the effectiveness of thiamine in rats with binge drinking model. For this purpose, total 21 spraque dawley rats were divided into three equal groups as control, alcohol and thiamine+alcohol groups. The thiamine+ethanol group was given thiamine at a daily dose of 100 mg/kg by oral gavage, starting 2 days before the ethanol administration. Alcohol and thiamine+alcohol groups were given 3.45g/kg/day ethanol as 20%. At the end of the study, while serum total bile acid, total bilirubin and insulin levels increased in rats in the alcohol group compared to the rats in the control group; total protein and albumin levels decreased (P<0.05). In the thiamine + alcohol group, LDL-cholesterol, total cholesterol, bile acid levels and AST enzyme activity increased, while ALT enzyme activity and total protein levels decreased compared to the control group (P<0.05). There was no statistically significant result in the values in the thiamine+alcohol group compared to the alcohol group. It has been concluded that acutely administered thiamine supplementation had no effect on alcohol-induced biochemical parameter changes in binge-drinking animals. In this sense, studies with longer-term thiamine use are needed. 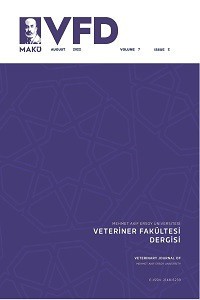