THE MALE NICKNAMES WHICH ARE USED IN THE CENTER OF MUS

A nickname is a name that can have positive or negative meanings added to the original name before or after the original name, taking into account certain characteristics of a person, family or group. The nicknames are used in every period of history.  It is known that before the Surname Law everyone's nicknames are used except family names. In villages, towns or cities that continue traditional life, certain features of people are put on the foreground and nicknames are attached. Not only in traditional societies but also in urban culture, nicknames are commonly used in professional, workplaces, students, wherever first degree relationships are valid. The nicknames spread quickly within society and are readily accepted by the majority.

In this study, field research was done based on Muş city center and it was tried to find the nicknames used from the past to today. As a qualitative study methods face-to-face interview technique was used. Source persons were selected from different age groups and tried to identify as many different samples as possible. Considering the social structure of the city, as well as the difficulty of reaching women, it has been tried to be found the nicknames only used among men. The nicknames used by women are not included in the scope of the study. As a result of the compilations, it was determined that the features of the center mouth of Muş were foreground, and a significant part of the nicknames were also mixed in Turkish, Kurdish and Arabic. It is understood that even the oldest native families of the city continue to recognize this feature, which is largely due to nicknames. The nicknames identified in the framework of this article were also tested for classification by considering different characteristics. 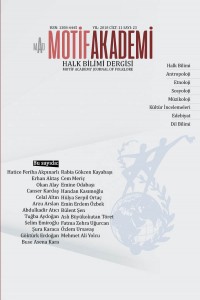