The Journal of Fungus

Alternaria species are common in nature (soil, air, plants, animals, etc) and can saprophytic, endophytic and pathogenic especially in plants. Now, it is difficult to solution all taxonomical problems only by morphological-colonial methods of mentioned genus without molecular studies. According to the current publications, Alternaria complex has 9 genera and 23 sections. Number of species is more than 275. The purpose of this study is to document the Alternaria species isolated from Turkey with their  subtrates and/or habitat. This checklist reviews approximately 132 published findings and presents a list of Alternaria species. According to the present publications, 30 Alternaria species have been recorded with various subtrates/habitats in Turkey. Among these species, Alternaria alternata and Alternaria citri species are the most common species reported from Turkey. The other species are A. arborescens, A. botrytis, A. brassicicola, A. burnsii, A. cichorii, A. Chlamydospora, A. cheiranthi, A. consortialis [Ulocladium consortiale], A. cookei, A. dianthi, A. ethzedia, A. humicola, A. humicola, A. infectoria [Lewia infectoria], A. longipes, A. mali, A. phragmospora [Embellisia phragmospora], A. petroselini, A. pluriseptata, A. radicina, A. raphani, A. saponariae, A. solani, A. tenuis [Alternaria alternata], A.  tenuissima, A. triticicola and A. zinniae. The oldest literature is belong to the year of 1948. This study presents information about reported of Alternaria species from Turkey in journals covered by Web of Science Database and the other journals, books, proceedings, etc. When we use “Alternaria” as the key word in Thomson-Reuters Web of Science Database in our search between the January 01, 1900 and May 20, 2015; there are 8669 publications and 7345 full texts  publications on this subject. 8669 publications contain the following disciplines (top 3): Plant Sciences: 2642, Agriculture: 1686, Biotechnology & Applied Microbiology: 699. These results indicated that there have been many scientific studies about Alternaria genus which were increased during the recent years. 2342 publications are done between the years of 2010-2014 and 225 publications were between the December 16, 2014-May 20, 2015. 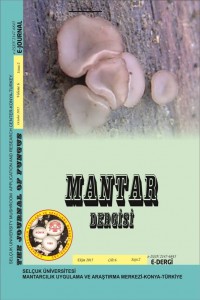 The works submitted to our journals are first judged grammatically. After this phase, articles are sent two reviewers. If necessary, the third reviewer is assessed. In the publication of works, a decision is made by evaluating the level of contribution to science and readers within the criteria specified in the writing rules. Reviewers are requested to submit their assessments within 30 days at the latest. The reviewers' evaluations and the answers to these evaluations are reviewed by the editor and it is decided whether the work will be published or not.

This work is licensed under a Creative Commons Attribution 4.0 License