Journal of Accounting and Taxation Studies

One of the digital analysis techniques used to facilitate the identification of the data to be examined, which affects the time factor positively in the field of supervision, is the Benford’s Law. The Benford’s Law basically represents a mathematical rule, with the first numbers of the numbers being the priority, and each figure showing the probability of encountering certain numbers. When the auditor analyzes the dataset with the Benford’s Law, he has an idea of ​​whether the figures show correctness.In this context, the financial data of a company has been assessed under the Benford’s Law. Four most frequently used accounts were identified in the accounting process and it was examined whether the amounts registered for these accounts were appropriately distributed to the Benford’s Law. The review was not limited to the Benford’s Law. The results were supported by Chi-Square Test. As a result, it has been determined that the first step test alone is insufficient and that the second and third step tests should be applied in order to obtain reliable results. 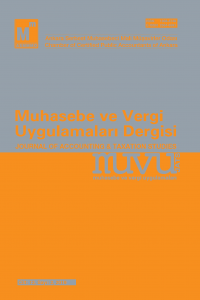 This work Licensed under a Creative Commons Attribution-NonCommercial 4.0 International License.

This license allows reusers to distribute, remix, adapt, and build upon the material in any medium or format for noncommercial purposes only, and only so long as attribution is given to the creator.