Feqîyê Teyran is one of the 16th-century Kurdish literature poets and has many Kurdish poems. After his death, his divan was compiled from his poems that were brought together. In this study, we will introduce a manuscript of his poem with its transcription, which is unknown and unpublished until now. At the same time, this poem will take its place in Kurdish literature and Feqîyê Teyran's Divan will mature a little more with this poem.
In this article, this poem will be analyzed in terms of form and content. Among the features of this newly found poem, the literary rhetorics of tesmit(internal rhyme) and i’ade stand out more. Therefore, this poem is called ghazal-i muad in terms of literary rhetorics. According to the form and rhyme scheme of the poem, this poem is a musammat ghazal, and in terms of content, it is a me’şuq ghazal and a ghazal that was written for the beloved. 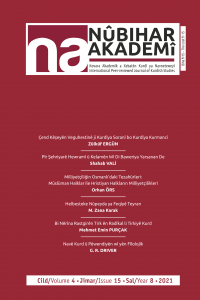