Institution of cohen (priesthood) began with Harun and passed from father to son until today. This class which is considered to be religiously high and valuable is divided into two groups: cohen gadol (the high priest) and cohen (priest). While the high priesthood is only represented by one person, the number of priest is more than one. This class has privileges as well as responsibilities. During the period when the Temple of Solomon was standing, the practice of worship was realized only by the high priest / priests. Because the high priest was very special, the dress he wore during the worship was explained in detail in the Torah. Such as the high priest, the duties of the priests were also determined by God. The priests who served as civilian judges also had to comply some prohibitions. For example, they were not allowed to approach the dead. They were also forbidden to marry any ordinary woman because people they would marry had to have certain characteristics.

The task of the class of the high priest / priests, who were determined by God in Judaism, ended with the destruction of the Temple of Solomon. Today, the cohens are given some symbolic religious duties. On the other hand, since it is believed that the Temple of Solomon will be rebuilt with the arrival of Messiah and this special class will be on duty, the preservation for Aaron's genealogy is stil somehow a matter of importance. 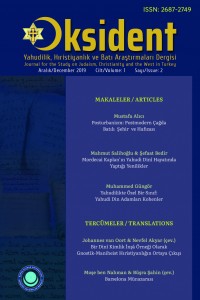