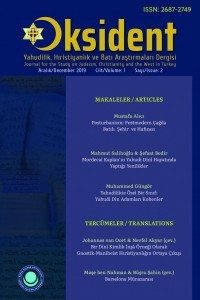 Oksident is a refereed and electronic journal that is published twice a year. The journal primarily includes articles on Judaism, Christianity, and the West. In addition, it covers articles on the relations and polemics among Muslims, Christians, and Jews. The articles that evaluate Western studies on Islam and Turkey may also be published in the journal. Articles may be written in Turkish and English.