Effects of Biochar and Solarization Applications on Some Soil Physical Properties

The effectiveness of biochar, which has attracted attention in recent years, is widely researched as a soil conditioner. In this study, the effects of biochar applications [0 (B0), 0.15 (B1) tons da-1] on different soil physical properties together with different solarization cover materials [polyethylene (PE), bubble polyethylene (BPE)] were investigated in greenhouse conditions. Soil penetration resistance has decreased from 1 MPa to 0.89 MPa levels with Biochar applications. The effects of applications on bulk density were similar to penetration resistance but were not found statistically significant., The aggregation rate of the soils was determined between 78.48-87.06 % depending on the changes in the applications. The highest aggregation rate was obtained from BPE covering material and B1 applications. The available water content showed thet there was a statistically significant (P <0.05) increase in the level of about 1% with biochar applications. As a result of the study, BPE cover material was found effective on the aggregation rate. In addition, penetration resistance decreased, While, available water content increased with biochar application.

Journal of the Institute of Science and Technology 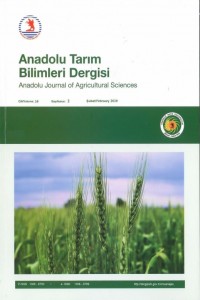