In this study, the correlation between the perceived self-efficacy, anxiety levels of prospective elementary school teachers in their mathematics education skills and the correlation between these factors and their professional belief levels were aimed to be measured. The sample of the study consists of 250 prospective elementary school teachers who were continuing their education at a state university in Turkey. The study was formed in accordance with the mixed method research. In the study, "Personal Information Form”, "Self-Efficacy Scale for Teaching Mathematics”, "Anxiety Scale for Teaching Mathematics “, “Professional Belief Scale” and interview forms were used as data collection tools. Tests which are parametric or non-parametric in terms of their normality distributions in quantitative data analysis were used as statistical packages for social sciences. The analysis of qualitative data was made according to content analysis method. It was determined that the prospective teachers' anxiety level about mathematics teaching was below average and the other variables were in average value. In addition, while there is a positive relationship between self-efficacy perception and professional belief level of teacher trainees to be consistent “candidate” can be used here too, there is a low-level negative relationship between anxiety level and self-efficacy perception level. On the other hand, it was found out that qualitative data showed that teacher candidates perceived themselves as inadequate due to lack of practical training in the university, this situation caused them anxiety and developed belief that they should develop professionally. 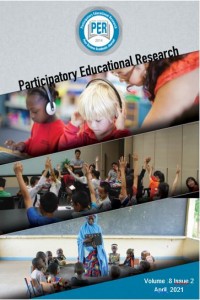