“Let me have a seat and see what's going on in this class”: Perspectives of Early Childhood Teachers about Parental Confrontation

Interpersonal relations are identified as affiliation and connections between teachers and parents in the context of education. Although the number of studies on the nature of interpersonal relations between these two counterparts have increased in recent years, the studies conducted about confrontational situations, especially in the early childhood educational context, are scarce. Whereas confrontational behaviors, which are intense and unexpected, may set barriers for a strong and quality parent-teacher dyad. Within this context, this study explored how early childhood teachers perceive the confrontational behaviors of parents. Interpretive phenomenological approach draws upon data from twelve semi-structured interviews. The data acquired from the participants was subjected to thematic analysis using MAXQDA. The analysis revealed three main themes regarding teachers' perceptions of parental confrontation: deprecation for early childhood education, incongruity of the parents’ actions and the modus operandi of the school, and parental violence against teachers. Indeed, the participants reported a wide-ranging confrontational behaviors of parents varying from the self-ordained to violent behaviors. The participants stated that they felt being frustrated, blamed and manipulated by parents. Although the presence of both psychological and physical violence was mentioned in the interviews, psychological violence like insulting, mocking, and deliberate insolence was more prevalent. In conclusion, this study revealed a need for the construction of professionalism in early childhood education settings within the societal perspective 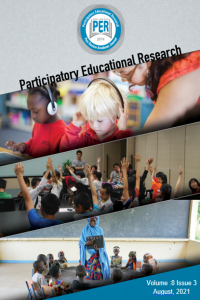