The recognition and enforcement of foreign court judgments in Turkey have been regulated by the International Private and Procedural Law Act, which was entered into force on 4 December 2007 (hereinafter referred to as “PILA”) in Articles 50-59. According to the Turkish Constitution Article 90/V, international conventions shall have the same effect as national laws. In Article 1/2 PILA, it is emphasized that the provisions of international conventions prevail over the provisions of PILA. Therefore, if Turkey ratified the Hague Convention on the Recognition and Enforcement of Foreign Judgments in Civil or Commercial Matters (hereinafter referred to as the “Convention”), its provisions would prevail over PILA in cases within the scope of the Convention. In this study, the provisions of the Convention and PILA are compared in order to determine to what extent the recognition or enforcement of foreign court decisions would be facilitated in Turkey in the event that Turkey ratified the Convention. It is hypothetically accepted that not only Turkey, but also all other South East European countries mentioned in the study would ratify the Convention. 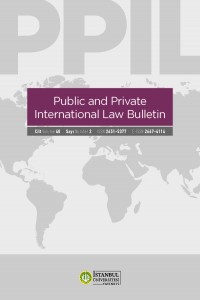