Violence is a social phenomenon. Significant research is being carried out on the human rights and public health dimension of violence. Studies on the reflection of violence in literary texts, on the other hand, began to attract more attention with the development of feminist literary criticism. In this study, we focused on especially the symbolic/verbal aspects of violence in terms of female characters in the novels, which are accepted as a literary genre. We limited our sample to the novels of Orhan Kemal, Kemal Tahir and Yasar Kemal, three of the distinguished novelists of Turkish literature. We analyzed in the novels of all three writers the ways in which women are characterized by the use of marginalized and degrading words (misogynist discourses) in public and private space, except physical violence and based on the most frequently used words, we made a sociological assessment. It is thought that the study will contribute to the efforts to find out about what discourses are employed by men for women in the social structure in which the novel is built. 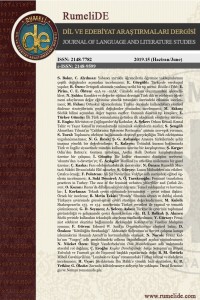