In terms of energy efficiency, one of the main methods to avoid waste of resources is to utilize waste heat energies. The Kalina cycle is used as a bottom cycle in many areas and is used for the generation of electrical energy from waste heat energy. About 90% of world trade is carried out by sea transport. For this reason, the recovery of waste heat released into the atmosphere from ships is great importance in terms of both global pollution and energy efficiency. In this study, the recovery of waste heat energy from the exhaust gas at a temperature of 240°C and a flow rate of 43.93 kg/s, which is currently released to the atmosphere in a real heat-power combined cycle on a tanker ship, is evaluated. In the study, unlike the traditional method, Kalina cycle was used for energy recovery of waste heat. For this purpose, the Kalina cycle is considered instead of the Rankine cycle system on an M/T tanker ship. With the designed system, it has been observed that an efficiency increase of approximately 30% has been achieved. While the net power obtained from the cycle is around 550 kW, it remains within the limits of 420 kW in the Rankine cycle. At the same time, an annual fuel saving of 610.18 tons and a thermal efficiency increase of 4.8% were calculated with the Kalina cycle. 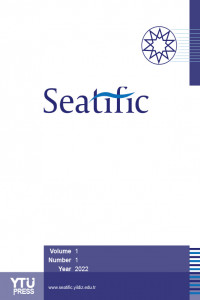