The importance of water is increasing with global warming and drought. For the effective use of water, technological developments should be followed and future scenarios and predictions should be taken into account. Algorithms that exist in every field today have become the center of our lives with technological developments. With the new developments in the agricultural field, the uses of machine learning algorithms are being investigated. In this study; As a result of determining the least limiting water range (LLWR) contents of soils on different land-use types (forest, pasture, and agricultural land), compaction and aeration problems in the area were evaluated. In addition, the predictability of SSA with different machine learning algorithms (random forest, artificial neural networks, and support vector machines) is demonstrated with distribution maps. The LLWR contents of the cultivated soils varied in the range of 0.03-0.21 cm3 cm-3. Optimum conditions were determined in 43.63% of the pasture lands examined in the study area, aeration problems in 36%, compaction in 14.54%, and both aeration and compaction problems in 5.45%. Optimum conditions, namely the available water content, were found to be equal to SSA in 37.03 % of the soils under forest cover. Among the analyzed algorithms, the most successful prediction was obtained with the random forest (RF) algorithm. The RMSE value was determined as 0.039 cm3 cm-3 in estimating the LLWR with the random forest algorithm. Sand and clay were determined as the best predictors for the estimation of RF and LLWR. In the distribution maps of the observed and predicted values obtained, the lowest RMSE value was determined by the Spherical model of the Simple Kriging method for SSA while the Exponential model of the Simple Kriging method was found the most suitable model for RF. As a result of the study, it has been revealed that LLWR can be obtained with a low error rate and distribution maps can be created with the random forest algorithm. In addition, it has been determined that there are more compaction and aeration problems in soils of hazelnut cultivated areas for agricultural production when compared with pasture and forest soils. 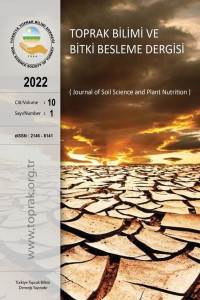