Aim: The aim of this study is to identify the problems faced by the family physicians in the field and to evaluate whether these issues are covered by the National Core Curriculum 2014 (NCC 2014).

Materials and Methods: The study has cross-sectional design. In 2017, physicians who actively worked as family physicians were invited to participate in the study via social media. 55 family physicians (family medicine specialists and general practitioners) responded to this invitation. The Critical Incidents Technique was used as the data collection tool in the study. The Critical Incidents Technology data form was sent by e-mail to the physicians who would participate in the study. In this technique, physicians were asked to write down three negative incidents that caused penalty and three positive incidents that caused rewarding with details in the work environment. The qualitative data on the positive and negative incidents collected were individually read, analyzed and categorized by a team of six. The categories that were specified are compared with fundamental physician skills of the NCC 2014.

Results: 299 incidents (134 positive, 165 negative) were collected from 55 physicians by Critical Incidents Technique. After the analysis of the results; emotions, patient characteristics, communication, application, health service and rewarding - penalty categories were determined. Comparing categories with the NCC 2014, both positive and negative incidents were found in the main titles of NCC 2014. It was determined that the negative incidents experienced by the family physicians were related to 16 titles in NCC 2014. These titles, are predominantly at 3-4 degree learning level, related with forensic case examination, child and newborn examination, monitoring growth and development of child, consciousness assessment and mental state examination, examination of corpse, preparing death certificate, reporting and notification, providing health services in unusual circumstances. Especially, the incidents described in the two sections regarding reporting and issuing the notification and providing health care in unusual circumstances are all negative and causing the family physicians to be penalised. It has been seen that physicians use the metaphor “my soul is tired” to describe the incidents. It was determined that patients frequently applied verbal and physical violence to the health care workers as punishment method.

Conclusions: The graduate competencies of the undergraduate medical education programs and the skills of the physicians for solving the problems they encounter in health care services does not always match one-to-one. The use of resources at the national level like NCC 2014 in education provides important contribution to compensate these contradictions. The obtained data shed light on a significant part of the problems experienced in the first step. Taking into consideration the problem areas that are determined during the revision of the NCC 2014 would be an important step for the solution. For family physicians, in order to present their professional knowledge and skills in a safe environment, educational institutions, graduates and, most importantly health system managers must be acquainted with and collaborate with each other. 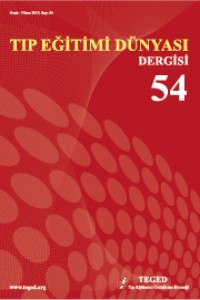