In this study, cone production, altitude and growth characteristics (height, diameter at breast height and crown diameter) were related, and also some genetics parameters were estimated. The data were collected from 150 individual trees of three natural populations sampled altitudinal (P1 260 m, P2 740 m, P3 1100 m) of Brutian pine (Pinus brutia Ten.) in Mugla-Fethiye district in 2020. Fertility variation based on cone production was found to be 1.91 for one old cones and 1.77 for two old cones in all populations. Genetic relatedness was estimated at 0.006 for one year cones and 0.005 for two year old cones in all populations. The number of effective parents was found to be 78 and 84 for one year and two year cones, respectively. As a result of the correlation analysis applied, statistically significant (p <0.05) positive relationships were determined between growth characteristics and yield of cones in general. According to the results of the Kruskal-wallis test, significant (p<0.05) differences were found between the populations in terms of cone yield. According to the stepwise multiple regression analysis results, the most effective factors in terms of cone yield at 1 year old were crown diameter (north-south), diameter at breast height and age, respectively. Crown diameter (east-west), diameter at breast height were the most effective factors on cone yield at 2 years of age, respectively. 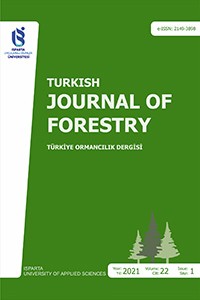