Objective: The objective of this study was to determine the infant mortality rate and the causes of infant death in Kilis Province, Turkey. Methods: This was a descriptive and retrospective study which utilized records and documentation from the death register and post-mortem reports. Annual infant deaths occurring in Kilis between January 1, 2012 and December 31, 2018 which were reported to the Kilis State Hospital and then to the Kilis Provincial Directorate of Health, were reviewed. Results: The infant mortality rate for Kilis was 18.4 deaths per 1000 live births between 2012 and 2018. Infant deaths were higher for male, preterm, and low-birthweight (LBW) babies. 54% percent of the infant deaths occurred in preterm babies. More than half (%61.7) of the mothers who died in labor did not have the minimum number of prenatal care visits (at least 4 visits) recommended by World Health Organization. Disorders related to short gestation and low birth weight, not elsewhere classified (26.6%), congenital malformations, deformations, and chromosomal abnormalities (19.4%), and other respiratory conditions originating in the perinatal period (13.0%) were the three leading causes of infant deaths between 2012 and 2018. Conclusions: The infant mortality rate in Kilis for the seven year period was higher than the national and the regional estimates. Our study showed that most infant deaths occurred in male, preterm, and low birth weight (LBW) infants. Most of the deaths among infants were preventable through promotion of institutional deliveries, early recognition of danger signs, strengthening of referral systems and periodic retraining of health care professionals.

Infant, mortality, cause of death, Turkey 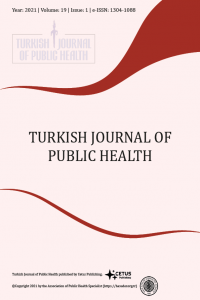