Turkey’s foreign policy approach started to transform from a more liberal and humanitarian foreign policy to a more realistic and pragmatic one in 2016, which was manifested in the Syrian civil war. In this period Turkey started to prioritize the use of hard power in order to prevent the threats resulting from the civil war. This paper asserts that while Turkey’s objectives in the Syrian crisis have remained stable, its priorities have changed especially in recent years. So, while from 2011-2016 humanitarian norms dominated Turkey’s Syria policy, after 2016, these norms became secondary priorities, and were replaced by hard power-based military assertiveness. To support this hypothesis, six main objectives of Turkey’s foreign policy are taken into consideration: Managing the humanitarian crisis, materializing the fall of the Assad regime, aiding the opposition forces, waging a proxy war with Iran, eliminating the threat of Daesh, and preventing the PYD/YPG from creating an area of dominance.

International Journal of Politics and Security

Security Environment and Military Spending of Turkey in the 2000s

Contemporary Review of the Middle East 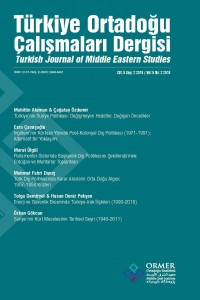